A development application has been submitted for the extension of Cloudland to create a new rooftop bar and micro-brewery.

Proposed by the Katarzyna Group, the planned rooftop bar is a 814m2 space which would include a micro-brewery, bar and covered outdoor area.

The microbrewery will be contained within an enclosed space in the south east portion of the roof and include associated spaces including a kitchen, washroom, storage area, amenities and lift lobby.

The rooftop design includes a mix of materials, building elements, including concave forms within the facade to Ann Street (seating areas within the rooftop), and landscaping.

To facilitate the extension, the following works are also proposed:

According to the development application, the proposed rooftop represents a high quality architectural design that includes a mix of materials, building elements and landscaping that creates visual interest in the streetscape.


Tell us what you think about this development below in the comment box. The development application for this project, available to view on Brisbane City Council’s Planning & Development Online is A005592231. 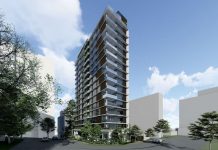