investLogan and Alder Developments have received development approval from State Government and local council to proceed with The York, Beenleigh’s first major commercial office development in a decade.

The City of Logan has approved the development and State Government approval allows for an underground carpark and a winter gardens overhanging the street at The York.

investLogan Chairman Steve Greenwood said the approval was an exciting step forward for project partners and the people of Beenleigh.

“We are extremely pleased with this outcome and look forward to getting the project underway in what will be a catalyst for the revitalisation of Beenleigh,” Mr Greenwood said.

“The built form of the development pays tribute to Beenleigh’s rich history, urban structure and rural setting in both building form, colour and materials.

“The development is designed to provide a modern interpretation of the distinctive character of Beenleigh’s historic buildings with elements like the ‘winter‐gardens’ protecting the street like an awning, whilst enabling passive surveillance of the active spaces and streetscape.

“On behalf of the project partners and the people of Beenleigh, I’d like to thank the State Government and the Logan Council for its approval of the application allowing us to reflect the heritage of Beenleigh through The York.”

General Manager of Alder Developments Greg Tupicoff said the approval for under and above ground volumetrics was an excellent design outcome for the project.

“This approval was crucial for our building design to maintain its efficiency and creation of publicly useable space, with a basement extending underneath John Lane, and protrusions of the office space out into John Lane and York Street air space,” Mr Tupicoff said.

“Preliminary works have commenced to prepare the site for construction, and Alder Constructions anticipates work will commence in April 2020.”

John Lane access and York Street access will remain open to pedestrians and vehicles throughout the construction period.

“The project team is committed to keeping the community informed throughout the planning, development and construction process,” Mr Tupicoff said.

The York will bring a near $40m economic and jobs boom on the back of investLogan’s investment in the new mixed-use precinct.

The project features a facelift to John Lane, between John and George Streets plus the development of a seven-storey commercial building, four SOHO (small office or home office) apartments and ground floor retail space.

Leading development and property economics advisor Urbis predict the York Street development will be the catalyst with more than 100 construction jobs and 140 new full-time jobs once the redevelopment is complete. 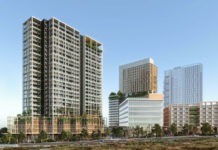 South Bank Parklands to be Expanded for Brisbane 2032 Olympics