A development application has been submitted by Aria Property Group for the refurbishment of the three storey ‘Merivale Flats’ building at 105 Melbourne Street, South Brisbane into mixed-use retail and commercial usage.

Designed by Twohill & James, the upper storey units will be retained in their current layout but undergo a change of use to offices. “The site benefits from a Heritage Exemption Certificate for building works, which was issued by Brisbane City Council on the 20th December 2021 facilitating demolition and most building work necessary to effect the changes in use.” – PPA

Under the plans proposed, the 59m2 retail tenancy facing Melbourne Street would become a shop with new fixed glazing installed along the shops frontage to Melbourne Street, providing a display window function.

The existing air raid shelter will be consolidated with two ground level units into a new restaurant which will feature 22m2 of roof terrace dining above the air raid shelter. The food and drink outlet would operate between 11am and 12 midnight, seven days a week.

The remaining six units on the upper story would be converted to small office tenancies.


The proposal is one of a few development applications lodged by Aria who are undertaking a retail strategy to transform Fish Lane into a vibrant laneway. 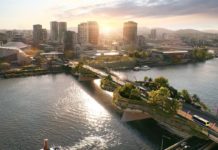