A development application has been submitted by Pidson Investments for the construction of a 28 storey commercial tower located at 251 Wickham Street, Fortitude Valley.

Designed by Bureau Proberts, the tower features an notable stepped slanting facade along the Warner Street side as well as four storey foyer space.

“A stepped façade has been adopted to create a building which stands out in the urban skyline and reduces the perception of bulk both from the pedestrian realm and from other vantage points throughout the city.” – Development application.

According to the development application, the multi-height foyer space is to encourage pedestrian movement and inteaction with the ground plane. The foyer space will inclde a cafe tenancy, public plaza and seating. Extensive planting and mature trees is planned.

Urban planner Urbis says that 251 Wickham Street is conceived as an urban catalyst, designed to inspire renewal by strengthening the emerging daytime economy of the Fortitude Valley Precinct.

“The tower consisting of 19 commercial levels on the corner of Wickham and Warner streets, leverages its central position opposite Fortitude Valley Train station to create an injection of space for creative business, tech start-ups, and city-fringe enterprise.” – Development application.

The project’s exterior has an identifiable steel and concrete exoskeleton that runs up the Wickham Street face of the tower.

251 Wickham Street is designed to cater to the developing creative and tech economy.

In catering for the developing tech and creative industries, the architects have designed a work-live typology that forms the basis of the tower’s design. A roof terrace is also planned for the crown of the building on level 22.

A previously approved 13 storey commercial development was granted by Council in December 2013.


Tell us what you think about this development below in the comment box. The development application for this project, available to view on Brisbane City Council’s Planning & Development Online is A005519158. 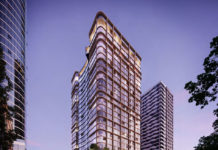