Investa Property Group have submitted a development application for the redevelopment of Kings Row, situated at 50 McDougal Street, Milton. The brownfield site, which is commonly known for it’s circular campus style office buildings and the site of the historic Milton House will undergo a four staged urban renewal process which will see Short Term Accommodation, Residential, Office and Retail uses.

The mixed use proposal sets out improve visual access and permeability for Milton House while enhancing important Milton cross block links to McDougal Street. Designed by Nettleton Tribe, the development will involve the demolition of an 80’s built office building which currently restricts physical and visual access to Milton House, shown below.

The heights of the four towers average approximately 20 levels (75m-90m). The development is in accordance with the new Milton Neighbourhood Plan which aims to:

In a bid to stop Brisbane’s choking urban sprawl, plans like the Milton Station Neighbourhood Plan are key to slowing our ever growing car dependancy and loss of agricultural and natural bushland surrounding Brisbane by directing growth where existing mass transit infrastructure exists. 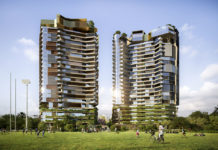