GURNER™ will move ahead with plans to deliver its landmark FV project to Fortitude Valley in Brisbane, following approval of the proposal by Brisbane City Council earlier today (Thursday, 19 June 2014).

The $600 million Elenberg Fraser designed building will include 900 apartments, including a 90 room 4.5 star hotel, and a ground floor retail precinct with a combined total of 3,188 square metres of restaurant, retail and office space and a 3,000 square metre residents-only resort-style Private Club.

The site is a 5,000 square metre island site bordered by Brunswick Street, Alfred Street and Barry Parade, with uninterrupted views to the city, river, bay and mountains.

FV will become a western gateway to the Fortitude Valley precinct and will play a key role in the rejuvenation of the west end of Brunswick Street, providing a catalyst for the transition of the area into a 24-hour activity hub, offering more diverse activity and retail engagement.

GURNER™ plans to launch the Flatiron building (Stage 1) to existing VIP clients shortly and is anticipating registrations of interest to commence around September 2014, with a public launch to follow later in the year.

GURNER™ founder Tim Gurner said: ‘With the huge amount of excitement around the project so far and the very large level of enquiry we are experiencing, we expect the sales campaign to be very quick as Brisbane owner occupiers and investors seek a level of design not yet seen in Brisbane.”

Construction is anticipated to commence in early 2015 and take two years to complete.

It is expected the construction phase of the project will result in approximately 2,400 direct jobs and a further 150 jobs associated with the hotel and apartment operation upon completion.

Lord Mayor Graham Quirk said the project is a significant investment in Fortitude Valley which has not seen development activity in many years.

Gurner said that through the landmark project, which has been compared to New York’s iconic Flatiron building, he is committed to honouring the unique qualities of Fortitude Valley, as well as creating a piece of world-class architecture for the city to be proud of.

“We are thrilled to be able to deliver what we know will be one of Australia’s most important developments to help create the ‘Future Valley’ as Fortitude Valley transitions into of Australia’s most active and popular locations to live and play,” Gurner said.

“FV will drive the transition of the Fortitude Valley precinct into a neighbourhood with a daytime personality as well as night-time vibrancy. It will enhance the offering for the local community by providing active street frontages on all sides, intended to house some of Australia’s best hospitality names and leading retailers, as well as creating the missing link connecting Barry Parade, Brunswick Street and Alfred Street.

“There is no denying the huge interest locally and internationally in the inner city Brisbane market, particularly among investors who see a lot of potential in this world-class city with its low vacancy rates, great affordability and increasing rental yields.

“Designed by award-winning architects Elenberg Fraser, FV will set a new benchmark for designer living and amenity in Australia and will take Brisbane living to the world stage.  We are particularly excited about the FV Private Club, which will offer residents over 3,000 square metres of world class resort style facilities only ever seen in the best 6 star resorts in the world’.

FV celebrates the aspirational and lifestyle benefits of its location and is designed to respond to Brisbane’s beautiful climate with indoor/outdoor living arrangements.

The 3,000 square metre residents-only area, to be known as the ‘FV Private Club’ will be akin to the best 6-star hotels in the world. Designed by world-leading landscape architects 360 degrees – well known  for their work at Sydney’s The Ivy – it will feature a large U-shaped infinity pool with in pool bar, private VIP areas, karaoke rooms and barbeque areas, outdoor cinema, sun deck, gym, library and private formal dining rooms that can be booked by residents.

Neville Jensen of Ray White Metro negotiated the sale of the largest part of the site on behalf of its owners, who are very pleased with the proposed transformation of the site to such an iconic landmark development. 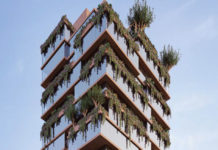 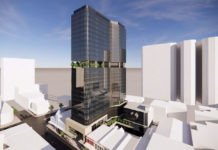 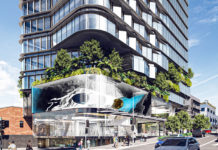