Anthony John Group have unveiled retail precinct plans for its $600m mixed-use Southpoint development, set to be delivered in line with completion of Flight Centre’s global headquarters in mid-2016.

A total of 4,500sqm will be offered over two levels and include a mixture of fresh food, dining and boutique retail options, catering to South Bank’s rapidly increasing worker, resident, visitor and commuter segments.

“South Bank already boasts an exceptional reputation for its multi-precinct offering, evidenced by it being awarded Property Council of Australia’s Queensland Retail Property of the Year Award in both 2014 and 2015.”

Mr Bulloch said the planned retail is aligned to South Bank Corporation’s vision for the site, creating a village- style market atmosphere that services the needs of immediate traffic generated by commuters, workers, students and residents.

“On top of the extremely robust traffic figures South Bank currently boasts, Southpoint is set to inject over 2,500 workers to the area. Flight Centre’s new global headquarters will see a portion of its business open 24/7 to support its ever expanding international client base, and over 1,000 new residents will reside on completion of the Emporium Residences, Emporium Apartments and The Apartments in 2017. Then of course there is also the 142 suites in the new Emporium Hotel.”

“South Brisbane and its neighbouring suburbs are also in the midst of rapid growth and Southpoint is key to supporting this. These factors are set to establish Southpoint as a highly activated, dynamic precinct in its own right.”

Helping create a striking entry statement will be the heritage listed Collins Place, which will be restored and refurbished and used again as it was during World Expo 88 as a destination restaurant.

“Southpoint is truly exemplar of a world-class transit oriented mixed use development and the retail precinct will reflect this standard.”

“Interest has been strong from both reputable local and interstate operators. We encourage interested parties to act quickly as opportunities are very limited.”

Southpoint’s retail will be delivered in mid-2016. 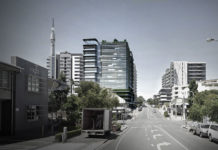