Brisbane’s Metro Arts will relocate in April 2020 from the Brisbane CBD to West Village, bringing West End its first live theatre in 25 years.

Sekisui House, developer of the multi-award winning West Village, is preparing to build Stage 3 of the mixed-use development that will enhance the cultural and retail landscape of West End.

As part of its Stage 3, West Village will welcome Metro Arts that will have multiple spaces in the development, including a new underground theatre, two galleries, two rehearsal rooms and dedicated office space. The Rialto Theatre on Hardgrave Road was West End’s last live theatre that closed after a severe storm unroofed the building in 1995.

West Village Project Director Andrew Thompson said the arrival of Metro Arts reflected Sekisui House’s commitment to community activity and participation and would be a welcome addition to village life.

After recently winning the 2019 President’s Award for best development in the UDIA Queensland Awards for Excellence, West Village is about to embark on its next wave of construction. Preparatory works will commence on 6 January 2020 that will eventually deliver new public benefit and amenity, including:

Mr Thompson said Stage 3 would include the 14,693sqm Village Retail component of the $1 billion development.

“In March 2021 we are scheduled to open a 4,000m2 Woolworths supermarket and liquor outlet, a fresh food market, specialty stores, an allied health and medical centre, a health and wellbeing precinct, a full-size gym and various food and beverage outlets,” Mr Thompson said.

Mr Thompson said that at the completion of Stage 3, scheduled for March 2021, a total of 35 retailers would be on site, including about 20 food and beverage outlets, surrounded by intimate laneways and light-filled arcades.

“We have also constructed 450 basement car parks for the public that will be of great benefit to our local traders,” Mr Thompson said.

“Stage 3 will link buildings and spaces throughout the site and reflect the city’s subtropical climate with a deep green landscape, including our new Mollison Green that will be the second of two publicly-accessible parks at West Village.

“Together with The Common, that opened in October 2018, these family-friendly green spaces will provide more than 2650m2 of urban parkland at West Village, designed as 24-hour spaces where public activity will be encouraged.”

As part of preparations for the Stage 3 development, Sekisui House is required to alter some of its West Village public spaces and has prepared a staged construction program, beginning on 6 January 2020 and scheduled to finish in March 2021.

There will be temporary changes to some access points to the development while construction works are underway. The Common and the Garden Pantry alfresco dining will remain open and operating throughout the Stage 3 development. 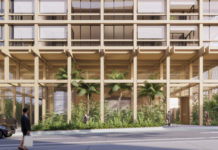