The owner of the current Eldorado 8 cinema complex across from Indooroopilly Station is proposing to build a new mixed use development which includes two residential towers up to 21 storeys, cinema expansion, new bowling alley, sky bar, ground level retail and open air cinema.

The proposed development will contain: The proposed South Tower will be constructed as part of Stage 1 and will contain a total of 78 residential units.

The second stage (North Tower) of the proposed Centre Activity development will incorporate a total of 325 residential units with the following unit mix.

It is anticipated that the streetscape improvements to the south-east end of Station Road combined with the creation of an entertainment destination to complement Westfield Indooroopilly will act to revitalise the area, encouraging people to utilise existing services in the locality and improving patronage to surrounding commercial and retail developments, including the Indooroopilly Hotel on the opposite side of Station Road.

The proposed development will also act to provide an activated and safe pedestrian connection between the Indooroopilly Train Station and the Indooroopilly Shopping Centre and significantly improve casual surveillance opportunities in the wider locality. DA number (A003770098) 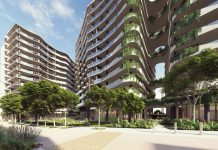