A development application has been submitted for the construction of a new digital awning billboard for 130 Queen Street, at the corner of Queen and Albert Streets.

Building owner Marquette Properties wishes to upgrade the facade of both individual shopfronts fronting the mall as well as replacement of the existing awning to facilitate the erection of a digital banner below the awning affixed to the facade.

According to the development application, the digital banner includes the following characteristics which Urbis states “contribute to the vibrancy of the landmark location and ensure a high-quality outcome”. There is no proposed change to the current extent of existing shopfront glazing however the building itself will undergo a new paint job with renders showing a dark black finish.

Designed by Cavill Architects, this isn’t the first time this prominent corner site played host to an electronic advertising display.

Even before the mall was closed to vehicle traffic in 1981, the site, known as Pavilion, featured a prominent ‘Seven National News Information Centre’ digital LED light screen located below Jojo’s restaurant.

The Queen Street Mall is considered one of Australia’s most successful shopping precincts attracting over 26 million visitors each year (pre-COVID 19 estimate).

In September 2019, 130 Queen Street was purchased for $77.1 million by Brisbane-based Marquette Properties and PGIM Real Estate with Marquette planning to overhaul the high-profile corner site.

The development application for this project, available to view on Brisbane City Council’s Planning & Development Online is A005482187. 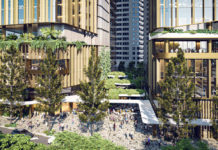