SEQ’s current transport usage is sitting at 7%. Shown in the new Connecting SEQ 2031 video above, the ‘Rail Revolution’ involves the construction of a range of new heavy rail lines, including signature projects listed below:

Connecting SEQ 2031 outlines the plan for a ‘rail revolution’; a complete overhaul of the rail system to provide a modern, high capacity network that will mean, for most passengers, rail transport will be quicker and more reliable than driving a car.

Although it may be a while away, the idea of a new Brisbane subway is included in the plan. The plan states the following in relation to a Brisbane Subway System:

“With an extra 100 000 people forecast to live in inner Brisbane (CBD, Spring Hill, Milton, South Brisbane and Fortitude Valley) and employment numbers doubling by 2031, there will be about 2.4 million trips a day in the inner city (up from one million in 2006). To help distribute these trips across the vibrant inner city core, an entirely new and separate Brisbane subway is proposed. The London Underground and New York city subway are well-known examples of this style of rail operation”.

This is SEQ’s first ever major blueprint plan which puts mass transit first, and cars second. A large step in the right direction for the future of this region. Below is a video of the proposed new $475 million Springfield line which will commence construction mid next year and is to be completed in 2013, two years ahead of schedule. The line will include two new stations ‘Springfield Central’ and ‘Springfield’. 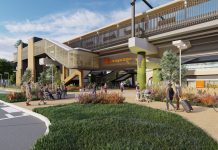