There are many great potential development sites around Brisbane. However some, more then others posses important characteristics which gives a site an iconic status. Brisbane’s five most iconic development sites with potential are based on their location, size and surrounding environment.

Eagle Street is at the heart of business and finance in Brisbane and forms what we know as the Golden Triangle. In 2006, Stockland, the owners of Eagle Street Pier and Water Front Place proposed to build two twin towers on the site soaring approximately 70 floors high. However due to economic woes, the proposal was put on the back burner and later shelved in 2008.

Now that One One One Eagle Street is nearing completion, this is the last remaining river front land on Eagle Street that is largely still under developed. Considering Eagle Street is the heart of Brisbane’s financial quarter, this site has been chosen as Brisbane’s No.1 iconic development site.

Built in the 1970’s and extended in the 80’s, the now ‘old’ supreme court complex will soon be superseeded by a much newer, larger, greener and more advanced courthouse building, complete with 45 different courtrooms. But the site from which the Supreme and District courthouse is relocating from is in essence one of the largest, most prominent pieces of state owned real estate in Brisbane’s CBD.

It is the last remaining land holding with street frontage access on all sides, facing Adelaide, George, Ann Street and North Quay. Such a site deserves to be developed into something of region-wide significance. The 2011 Brisbane Ideas Competition produced one idea which proposed a new opera house and theatre to rival the Sydney Opera House. Other ideas which have been dreamt up include a new entertainment centre, mixed use precinct with hotel, office, residential and retail space as well as a future transit hub.

One thing is for sure, that this is a very significant site. It has been chosen as No.2 because of it’s location large size.

Today, the Brisbane Times reported that if successful, a Liberal-National Government would open a bidding process to build a new 4/5 star hotel on the site. It is not yet known what the Labor Government has in mind for the site.

The best outcome for the site may come from a public private partnership between the State Government and the private sector, which could see a mixed use space of cultural/entertainment investment from the Government as well as hotel, residential and commercial investment from private developers, rather then the government handing over the whole site to a single private entity. Creative, innovative ideas need to be explored to give Brisbane more cultural and entertainment destinations while a mandate for minimum development outcomes should be applied in this case.

Time will tell what will come of this site. Lets all cross our fingers that this great opportunity is not wasted.

Also known as the ABSOE Site, this is possibly one of Brisbane’s most exciting development opportunities. 93 Boundary Street is a significant slice of light industrial land in the heart of West End’s fast growing entertainment and dining precincts. The site is around 22,410m2 in size and is located in a Multi Purpose Centre – Major Purpose Centre MP2 which means it can achieve up to 15 levels under the South Brisbane Riverside Neighbourhood Plan.

There have been recent murmurs of a new Big W and Woolworths being built on this site, however due to the close proximity to West End’s unique restaurant precinct, one would think that this site is destined to be something more unique and in line with the immediate area.

For decades Parmalat has been processing milk products consumed both locally and exported as far away as Hong Kong. The facility is one of Brisbane’s last remaining inner city factories. Given the lack of heritage or ‘iconic status’ which Milton’s XXXX brewery possesses and coupled with rising land values, in time, Parmalat will eventually move its production elsewhere leaving a very unique, riverfront site to be redeveloped.

Rumours have been floating around of a State Government buyout which would see the relocation of the Treasury Casino to the site and a new entertainment complex created. Whatever is planned, the site is rated No.4 due to it’s location along the Brisbane River and right next to Southbank’s Cultural Precinct.

The Royal on the Park hotel has been operating for around 40 years. The site is very large and faces the Botanic Gardens, therefore views will never be built out. Last year it was revealed that the site will soon become the main portal for the Albert Street underground rail station as part of the Cross River Rail project. The Government has proposed to use the site as a portal as well as accommodating possible residential and office towers.

It is a significant site due to the proximity to the Botanic Gardens and the sheer size of the land. 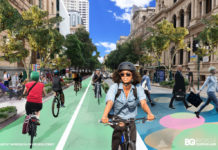