The first of seven planned double-decker CityCats has hit the water this week after being completed by local company Aus Shops in Murarrie.

‘CityCat 22’ had created 40 new local jobs during the construction phase and had now hit the waters of the Brisbane River for the first time.

Lord Mayor Adrian Schrinner said the new vessel is for the residents and visitors of Brisbane, so having it built by a local company along the banks of the Brisbane River made perfect sense.

“This vessel is truly Brisbane with everything from the design to the construction done right here in Brisbane by our highly skilled local residents.

“This is now our most modern CityCat on the water and is a fantastic way people to not only get home quicker and safer, but it is also a popular tourist experience in our river city.”

Cr Schrinner said the construction was now complete and the vessel had hit the water and was ready to start trials.

“The 43-tonne boat has now been carefully moved from the warehouse to the dock and is now on the water and ready to start on-water trials,” he said.

“Moving this boat was a four-hour task and it was carried by a special device to ensure it remained secure and balanced during the move.

“Once the on-water trials are complete, the ferry masters and crew will do 20 days of onboard training.”

Cr Schrinner said the new CityCat represented the evolution of river travel and would enhance the passenger experience.

“The double-decker CityCat will offer a new way to experience Brisbane, with magnificent panoramic views from both floors,” he said.

“Passengers will be able to take in the fantastic views of our river city from the upper deck of the boat, which is a brand-new feature, or relax in the lower deck cabin which is more open than existing vessels.

“While it is still a few weeks ago from its maiden voyage, on-water testing and training is necessary before passengers jump on board.

“Our new vessel will officially join our existing CityCat fleet in November as our most modern vessel. 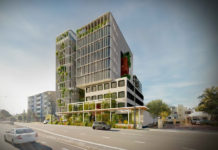