The Brisbane City Council has announced that it will effectively “defer” plans for the South Bank underground station as part of the Brisbane Metro project.

According to Lord Mayor Adrian Schrinner, the deferral of the underground station until a later date would mean priority works can accelerate.

“We’ve been working with the State Government for almost a year, trying to finalise the design for the Cultural Precinct underground station and on Wednesday we agreed the deferral to a later stage was the correct decision so we can get on with the job,” Cr Schrinner said.

“It is a very complex project, with many stakeholders and it’s going to take time to finesse the Cultural Centre design, so we will not let this one site delay Brisbane Metro and its 2600 jobs any further.

Cr Schrinner said deferring the Cultural Centre Station to a later stage of the project was the most cost-effective and practical option for now and this is the best value plan for residents.

“Brisbane Metro is about getting people home quicker and safer, and spending more time arguing about the design of the Cultural Centre Station won’t get residents home quicker.

“We will continue early works around the Cultural Precinct so that the underground station can be delivered as part of a later stage; future-proofing the project.

“Importantly, our modeling also shows that retaining and upgrading the existing street-level station at the Cultural Precinct will have no impact on Brisbane Metro travel times,” Cr Schrinner said.

“This is the best outcome for ratepayers as well as the workers and suppliers waiting for jobs and opportunities flow from the Brisbane Metro project,” Cr Schrinner said.

While the Victoria bridge will now be converted into a green bridge, allowing only buses, cycling and pedestrians, the current Grey Street intersection will still exist for the time being.

“Instead of the original cut-and-cover design, this section will be bored. This will minimise traffic disruption and allow us to deliver elements of the Adelaide Street vision,” Cr Schrinner said.

“By tunneling under Adelaide Street, we can maintain connection along one of Brisbane’s busiest streets, as well as minimise disruption to business,” Cr Schrinner said.

“We’ll continue to work with Brisbane City Council through that process while it gets started on other parts of the Metro project.”

Brisbane Move has been selected as the preferred tenderer for the major infrastructure works for the bi-articulated metro bus project.

ACCIONA and ARUP will partner with Council to form the Collaborative Partnership to design and deliver the major infrastructure works for the project.

The Brisbane Metro project has evolved considerably since its inception, below is a brief timeline of the project’s evolution.

Lord Mayor Graham Quirk has announced his first major city council election commitment, a plan for a $1.54 billion “Brisbane Metro” system which is proposed to be a mixture of new underground tunnels as well as transforming the existing South East and Inner Northern Busways from Woolloongabba to Herston and into the CBD.

Lord Mayor Graham Quirk is seeking the views of public transport commuters and residents as part of a city-wide community engagement program to help develop the business case for the Brisbane Metro Subway System. The Brisbane City Council has fine-tuned its plans for the Brisbane Metro Subway System in order to overcome some critical operational issues that it had experienced with the previous design. The newly unveiled system is a complete departure from a metro style track-based rubber tyre system.

Lord Mayor Graham Quirk has released the business case into the Brisbane Metro that confirms the viability of the project at a cost of $944 million. The business case also reveals the metro service will provide 24-hour public transport on weekends and 20-hour services on weekdays.

The Brisbane Metro is a step closer with Council selecting a preferred site to construct a depot for the new metro vehicles at Rochedale.

Brisbane Metro Deconstructed: A Summary of the Draft Design Report

The Federal Government will invest $300 million in the Brisbane Metro following an announcement by the Minister for Urban Infrastructure and Cities Paul Fletcher. This year the Brisbane Architecture and Design Ideas Competition, an industry-led initiative has been rebranded to ‘4000 Ideas’ and will be supercharged with the support and sponsorship of the Brisbane City Council. Brisbane City Council has released its plan to transform Adelaide Street in Brisbane’s CBD into a new transit boulevard, including an underground tunnel entry for Brisbane Metro. 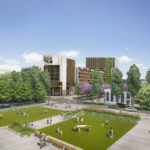 The Queensland Government has unveiled its vision of the Cultural Centre precinct following notification to the Brisbane City Council that the planned underground Cultural Centre Metro Station needs to be redesigned.

Lord Mayor Adrian Schrinner has proposed expanding the Brisbane Metro to the Brisbane Airport as part of future planning for the precinct to make it easier and more affordable for airport workers to get home quicker. Preliminary works will commence around the Cultural Centre in January 2020 following a united Council and State Government announcement that the project will proceed.

Brisbane’s Lord Mayor Adrian Schrinner has announced that Brisbane’s new turn-up-and-go Metro project will be powered by a fleet of fully electric vehicles by Volgren and electric-vehicle producer HESS which will deliver 60 vehicles for the Brisbane Metro. 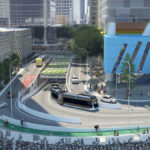 The Brisbane City Council has announced that it will effectively “defer” plans for the South Bank underground station as part of the Brisbane Metro project.